A Kenyan member of parliament, TJ Kajwang, who presided over the symbolic inauguration of Raila Odinga has been arrested.

The legislator who is also one of Odinga’s lawyers was arrested outside a court building in the capital, Nairobi.

Local media reported that Kajwang has been directed to go to the Offices of the Directorate of Criminal Investigation.

The arrest follows the gazetting by the Kenyan government, of the National Resistance Movement opposition outfit led by Raila Odinga, as a criminal organisation.

Wearing a lawyer’s robe and wig, Kajwang was one of the people flanking Odinga as he took the ‘oath’ as the people’s president yesterday at Uhuru Park before thousands of his supporters.

Meanwhile, police confirmed that one of the opposition leaders’ residence was attacked last night, after they recovered a stun hand grenade and shells of live bullets.

He told the media this morning that the attack which happened in the wee hours of Wednesday morning was an attempt to intimidate him and fellow opposition politicians.

The consequences of Odinga’s inauguration which government had warned against continue, even as major television stations remain switched off ‘until a full-scale investigation into a serious breach of security” is concluded’, according to the country’s interior minister Fred Matiang’i. 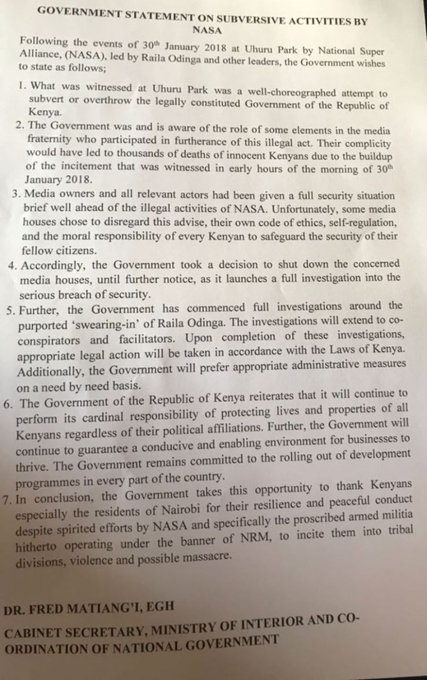 Kenyan journalists and human rights groups have denounced the media blockade and called for a swift end to the ‘unprecedented intimidation of journalists’.